About Me: ART VILLASANTA

MY CRAFT IS WRITING. My business is providing profitable information that advances my client's interests in both the online and offline arenas.

I began my career as a journalist for a business newspaper and migrated to writing for corporations and doing research. I’m an Editor; an Editorial Content Manager for websites and mobile media; an Editorial Consultant for publications; a Research Consultant and a Public Relations man all rolled into one. It's a multi-tasking job made necessary by the convergence of digital and traditional media. 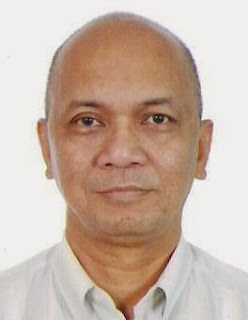 I write "INFORMATIONALS." That's a word I coined to denote my special brand of "research-based writing" or "knowledge-based writing."

My emphasis on INFORMATIONALS also extends to my stories published by the "Philippine Daily Inquirer," the Philippines' leading newspaper (in print and online). It can also be found in my healthcare and other stories published in "Enrich," the monthly healthy lifestyle and living magazine of Mercury Drug Corporation sold at Mercury pharmacies nationwide. I've also tried my hand at this weird job called "content aggregation."

Advocacy and Journalism
My kind of writing is part “advocacy" and part journalism. Advocacy is a skill markedly different from journalism.

Unlike journalism, advocacy doesn’t aim to expose the whole truth and nothing but. This doesn’t mean, however, that advocacy is journalism’s evil twin.

An advocate will err on the side of caution instead of going hell bent for the truth like a journalist. An advocate's frame of mind makes sense when you consider that companies are always at each other’s throats, and that misplaced words can cause a world of hurt that could lead to a loss of sales, a loss of markets and a loss of jobs—including yours.

Freedom of the press generally insulates journalists from the consequences of their mistakes. This protection doesn't extend to the advocate in the world of business.

My job marries the single-minded focus of advocacy with the thirst for truth of journalism. The result is my INFORMATIONALS which, to quote a famous adage, focuses on delivering "Truth Well Told." 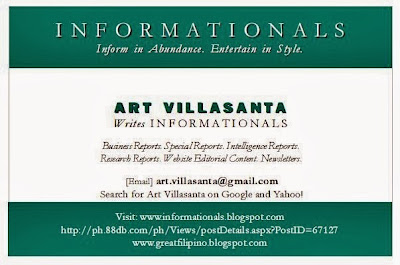 I’m also deep into Information Technology and am looking to write more for companies in this unimaginably dynamic industry.

I’ve written and been “ghost editor” to some 20 company newsletters and magazines; over half a dozen annual reports and a lot of published materials for marketing, sales and HRD. I’ve also created concepts and written copy for print ads and other promotional materials.

Then, there are my short stories that dwell on speculative fiction, and assorted essays dealing with life's mysteries, including that eternally baffling emotion called love.

The Philippines in Space
My other advocacy is getting the Philippines to launch itself into Space and, therefore, into the Future. This country doesn't have a single operational satellite orbiting the Earth or a "Space Industry" to speak of.

My blog at www.greatfilipino.blogspot.com has many stories advocating the Philippines join the Space Industry. I've also advocated a search for the first Filipino astronaut since the year 2002. I began writing about satellites in earnest for Philippine readers in 2001.


Boyhood awe
My fascination with space was influenced by a boyhood wonderment about science, space, science fiction and the fantastic. Then in the 1960s, I discovered Marvel Comics and was hooked on the fantastic forever.

A copy of the Fantastic Four, The Amazing Spider-man, X-Men, The Avengers, Tales of Suspense (featuring Iron Man and Doctor Strange), Tales to Astonish (The Hulk, Giant-Man/Ant-Man, Namor the Submariner) and Journey into Mystery with the Mighty Thor cost just 65 centavos in my youthful, halcyon days. I walked the 15 minutes from our home along Roces Avenue in Quezon City to Top's Market during the first week of every month to buy these marvelous comic books.

Stan Lee was my god of creativity. Jack Kirby and Johnny Romita were the greatest artists on Earth. "Make Mine Marvel" was the motto of us Villasanta kids (Art, Fides, Eric and Gilbert) and my cousin, Dennis Gargantiel. We were all "Marvelites" who hated corny DC Comics with a vengeance.

Doing it on your own
I'm a freelancer or free agent. In my line of work, the competition for projects is severe. If you don’t have a project you don’t eat. The job does have its upside. You’re your own boss (every employee’s dream, isn’t it?) and there’s no 8-5 routine.

My brass ring
Being freelance also gets you to make time for jobs really close to your heart such as my personal advocacy to increase this country’s awareness of PEFTOK and what it accomplished in the Korean War.

I’m doing this through this PEFTOK website (formerly found at www.geocities.com/peftok) and in the stories about PEFTOK I keep sending out to the media to be published online and offline or broadcast.

Being the "Forgotten Historian" of a "Forgotten War" has taken a lot out of me, and no one seems to care enough to support me, but I look at the Future and tell myself the sacrifice is worth it. It's the only consolation I have.

If my generation hardly cares about PEFTOK and the Korean War, will my children’s generation give a damn? Will the generation after that care?

They probably won’t if they don’t know that PEFTOK and the Korean War existed. Hence, my two PEFTOK websites and my relentless awareness campaign. And there’s a brass ring in this for me.

It’s a comprehensive history about PEFTOK in one book or in one gigantic website. But I can’t do this alone and will need your help. Corporate sponsorship would be of great use to me here.

Thank you
Every one of those persons here and abroad who took the time to visit the PEFTOK website is one more person who knows more about PEFTOK than he did before. And he or she may spread the word about PEFTOK to others.

It will go on from there. Hopefully, one of the coming generations will see fit to fully honor PEFTOK and the victories it achieved in defense of that ideology we call Democracy.

Each of this website's visitors has done honor to the memory of the men of PEFTOK. For this I am deeply grateful.

We owe them our freedom.
We must not forget the more than 7,200 Filipinos who fought in another country’s war because it was their duty as Filipinos to battle the enemies of their state, both foreign and domestic. It would probably be fair to say that the PEFTOK BCTs were the best combat units we had at the time, which is why they were sent to Korea.

But, as good Filipino soldiers, they fought the foreign war they were asked to fight. And when they returned home, the PEFTOK BCTs returned to fighting the Huks or Muslim bandits in Mindanao.


And what did the men of PEFTOK achieve? They won a double victory in the 1950s: they helped preserve South Korea’s independence and—most important of all—played a vital role in decisively defeating communism’s first and most serious bid for power in the Philippines.

The decade of the 1950s guaranteed the existence of the Philippines as the democratic state it is today.

That the Philippines and South Korea remain democracies is also the fruit of the sacrifice of thousands of ordinary Filipino men and women who did their duty in a "Forgotten War" despite their doubts, fears, flaws and limitations. These men and women have earned the right to be honored as heroes.

REMEMBER PEFTOK.
-- And Honor the Hero in Us All --

I WAS ONE OF the historians who talked about the polymath and historian Epifanio de los Santos on the  TV5 program "History." The Epifanio de los Santos episode broadcast Feb. 26, 2014 is a three-part clip on the History website. You can click on either the image or caption below to view the episode. History is hosted by Lourd de Veyra and airs 10:00 p.m. on Wednesdays.

The entire PEFTOK website on Blogspot.com was written by Art Villasanta, whose full name is Arthur Dominic J. Villasanta from Quezon City in the Philippines.

Posted by Art Villasanta at 9:41 PM