THE PHILIPPINES joined the Korean War despite having to contend with a communist-led rebellion and an economy crippled by the immense destruction wrought by the Second World War.

The Philippine Army had nine out of its 10 Battalion Combat Teams (BCTs) and its lone artillery battalion fighting the communist-led Hukbalahap or Huks when the 10th BCT was selected as the first Korea bound combat unit on 23 August 1950. Together with other military units such as the Philippine Constabulary (the national police force), the government was holding the line against the Huks with some 25,000 men.

The BCTs were highly mobile, compact and self-supporting battalion-size fighting units designed to operate independently of each other in their territories. They were organized specifically as anti-guerilla units and were successful in this role.

After World War 2, the Huks launched a rebellion aimed at overthrowing the democratically elected Philippine government and replacing it with a Marxist-Leninist state. The Huks had an armed strength of some 11,000 men in 1949, and many of their men were veterans of the guerilla war against the Japanese. The Hukbalahap, an acronym for the “Hukbo ng Bayan Laban sa Hapon” (the Anti-Japanese People’s Army), was probably the most potent of all Filipino guerilla units in the war.

The strict discipline of its guerillas; the mobility and hitting power of its “squadrons” (units of 100 or more men) and the widespread support of civilians in Central Luzon allowed the Huks to inflict significant losses on the Japanese.

During the American campaign against the Japanese in 1945, the Huks assisted the US Army in freeing towns and provinces in Central Luzon from the Japanese. In Tarlac, they raised both the Philippine and American flags after liberating the provincial capital. The Huk leadership took a Marxist-Leninist bent following widespread (and probably misguided) government suppression of the movement after the war.

The Huks had superior knowledge of the terrain in North and Central Luzon, the main theaters of the guerilla war. They could also count on the support of a mass base of peasants and farmers alienated from the government by chronic landlord abuses, grinding poverty, bureaucratic neglect and military atrocities, particularly those committed by the Military Police and Civilian Guards. By 1952, the high watermark of their rebellion, the Huks had an active and armed strength of more than 170,000 men and women and a mass base of over two million people. The Huks were finally defeated by a combination of battlefield losses and a dwindling mass base in 1955.

Elpidio Quirino, Philippine President in 1950, said the Philippines was sending its men to fight in Korea in fulfillment of the country’s obligation as a co-signer of the United Nations Charter. There was another, deeper reason for committing the Philippines’ limited military power to a foreign war. Korea was 1,600 miles away and a communist victory would probably have been a severe blow to the Philippines’ campaign against the ascendant Huks.

“Poor as we are, this country is making a great sacrifice in sending you there (Korea), but every peso invested in you is a sound investment for the perpetuation of our liberty and freedom,” said Quirino to Filipinos who attended the farewell rally for the 10th BCT on 2 September 1950 at the Rizal Memorial Coliseum in Manila.

And the Philippines was poor. The national government was almost bankrupt in 1950, relying heavily on aid from the United States and reparations from Japan to stay afloat and to rebuild an economy shattered by the Second World War. Damage to industries was estimated at some P600 million while a further P800 million in assets were destroyed.

The government was also plagued by massive bureaucratic corruption that, in 1950, siphoned off more than P1 billion in badly needed foreign aid. Despite these daunting realities, the Philippines committed its meager armed strength to aid Korea, and also offered to send combat troops to Nationalist China to deter a feared Communist Chinese invasion.

Beginning a tradition of service to humanity
PEFTOK began the Philippines’ noble tradition of providing military or humanitarian aid to nations in need.

Since the Korean War, the Philippines has sent its soldiers, police and medical personnel to aid United Nations missions around the world. Filipinos were in the Vietnam War as the Philippine Civic Action Group (PHILCAG) that served in Tay Ninh province in South Vietnam and in Cambodia, among others.

As of April 2010, the Philippines was the world’s 24th largest contributing country to UN peacekeeping operations. Over 1,000 Filipino soldiers and policemen serve in eight countries as members of the United Nations Department of Peacekeeping Operations (DPKO). Of the total number of Filipino peacekeepers, some 650 are from the Armed Forces of the Philippines (AFP) and 410 from the Philippine National Police (PNP).

* ON 25 JUNE 2005, the “Marikorea Monument” was unveiled at Marikina Heights, Marikina City. A project of the PEFTOK Veterans Association, Inc. (PVAI) and its President, the late BGen Bienvenido R. Castro, the Marikorea Monument and the “Korean War Memorial Pylon” at the "Libingan ng mga Bayani" honor our soldiers who served in Korea from 1950 to 1955.

The word “Marikorea” was coined from the words Marikina and Korea. Before deploying to Korea, all five PEFTOK BCTs trained extensively for mountain combat in Marikina, whose rolling hills and rugged terrain resembled that of Korea. Castro said the Marikorea Monument filled a decades-old yearning by Korean War veterans for a monument to call their own.


Standing some 20-feet tall, the monument is crowned by an eternal flame atop a granite pylon. Inscribed on metal plaques in the monument’s base is the history of the Philippines’ participation in the Korean War and unit histories of the five BCTs that served in Korea, all of which I wrote.

It also consists of a library; auditorium; a roof deck and offices for the Museum staff and PVAI.

I am proud to have written, laid out and provided the pictures for the history of the Philippines' role in the Korean War printed on all the large floor panels and part of the wall panels at the Museum.

The Memorandum of Agreement that gave rise to the Friendship Center was signed in May 2009 by former Ambassador Choi Joong-Kyung, former Secretary of National Defense Gilberto Teodoro, Jr. and the late BGen Victorino Azada, former PVAI President.


* PVAI ALSO PUBLISHED TWO souvenir programs that were, in effect, mini-histories of PEFTOK and the Philippines’ involvement in the Korean War. I was honored to have been chosen to develop, edit and layout both magazines: the first published in September 2006 and the next in September 2008 to mark Korean War Veterans of the Philippines Memorial Day.


The first was named “Honoring Democracy’s Forgotten Heroes” while the second carried the title, “Significant Filipino Battles of the Korean War.” 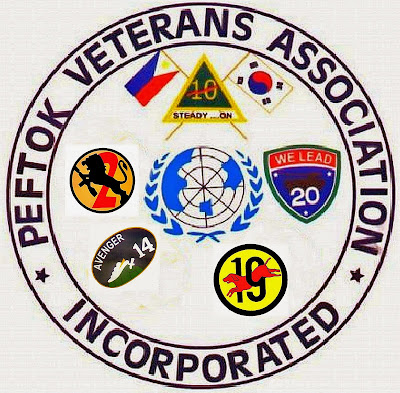 The main objective of PVAI since its founding on July 23, 1959 remains true to this day: to uplift, through self-reliance, the economic well-being of all PEFTOK veterans, their widows, orphans and dependents.

PVAI’s other objectives are the preservation and maintenance of the PEFTOK Scholarship
Program for the descendants of PEFTOK veterans, and further enhancing the close relationship between Filipino and Korean war veterans and the local Korean community.

PVAI's office is located inside Camp Gen. Emilio Aguinaldo in Quezon City. Its phone number is 911-2579. Its email is peftokwarriors@gmail.com.